The concepts and definitions used in TypePal.

The syntax of a source language may impose various restrictions on the identifiers that can occur in a program. They amount to including or excluding specific characters for various occurrences of names in the program. One example is the requirement in Java that class names start with an upper case letter. TypePal is agnostic of such conventions and represents each name as a string. Qualified names are also supported and are represented by a list of strings.

The Rascal data type Tree (REF) is used to represent all parse trees that can be generated for any syntax described in Rascal. Tree is also a super type of any syntactic construct that may occur in a parse tree. In TypePal we interchangeably use Tree and the source area (a source location) associated with it to uniquely identify program parts, definitions, uses and scopes.

A scope is a region of a program that delimits where definitions of identifier are applicable. An identifier is defined in the scope where it is defined and in all nested subscopes, unless one of these subscopes redefines that same identifier. In that case, the inner definition applies inside that nested scope (and its subscopes). Scopes are identified by the subtree of the parse tree that introduces them such as, for instance, a module, a function declaration or a block. Special rules may apply such as define-before-use or scopes-with-holes.

The scope graph is one of the the oldest methods to describe the scope of names in a program. We use a version of scope graphs as described by Kastens & Waite, Name analysis for modern languages: a general solution, SP&E, 2017. This model uses text ranges in the source text (happily represented by Rascal's loc data type) to identify and define all aspects of names. A scope graph provides lookup operations on names that take both syntactic nesting and semantic linking (via paths) into account, as well as the specific roles of identifiers and paths (described below).

The definition of an identifier is inside TypePal characterized by a Define:

The use of an identifier is characterized by a Use:

where use represents the use of a simple name and useq that of a qualified name. In the latter case, a list of strings is given; the last string is a simple name in given idRoles and the preceeding strings are its qualifiers in qualifierRoles.

TypePal is based on scope graphs that are not only based on syntactic containment of scopes but can also express semantic connections between parse trees. While scopes are strictly determined by the hierarchical structure of a program (i.e., its parse tree), paths provide an escape from this restriction and define a semantic connection between syntactic entities that are not hierarchically related and may even be part of different syntax trees. Connections between syntactic entities are paths labelled with user-defined roles. Paths are represented by the Rascal datatype PathRole. An example is the import of a module M into another module N that makes the entities in M known inside N. Here is an example of a path role to mark an import path between two parse trees.

Paths are, amongst others, used in the resolution of qualified names. 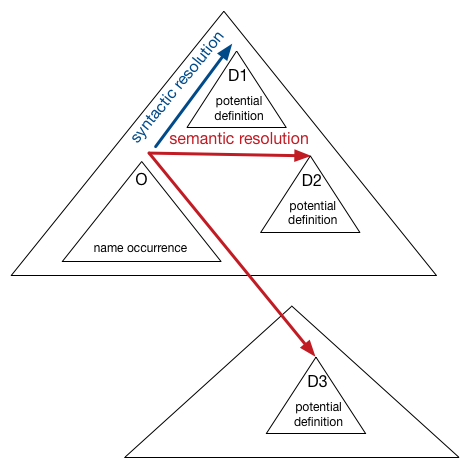 IMPORTANT: Name resolution need not have a unique solution. Therefore the author of a TypePal-based type checker can provide functions to (a) filter valid solutions; (b) determine which identifiers may be overloaded.

Identifiers, scopes and path can play different roles that determine how they will be handled. They are represented by various Rascal datatypes that can be extended by the author of a typechecker.

Identifier roles are modelled by the data type IdRole. Here is an example where roles are introduced for constants, variables, formal parameters and functions:

Scope roles are modelled by the data type ScopeRole and are used to distinguish different kinds of scopes. Later (REF) we will see that this can be used, for instance, to search for the innermost scope with a specific role, say the innermost function scope. Here is an example that introduces scopes for functions and loops:

Path roles are modelled by the data type PathRole:

The type to be associated with names varies widely for different programming languages and has to be provided by the typechecker author. TypePal provides the data type AType that provides already some built-in constructors:

AType that has to be extended with language-specific types.

The typechecker author also has to provide a function to convert AType to string (it is used create readable error messages):

When defining a name, we usually want to associate information with it such as the type of the defined name. TypePal provides the data type DefInfo for this purpose:

The ./Solver argument of getAType and getATypes is the current constraint solver being used.

WARNING: noDefInfo may be removed.